The “hot” zone of the Luxembourg Station neighbourhood and its surroundings is one of the most popular for local and foreign companies.

Modern buildings stand side by side with mansions, overlooked by the station tower, which, when illuminated in the evening, becomes a beacon among the waves of cars, buses and other forms of transport plying the Avenue.

In recent years, the station district has undergone many transformations, to be topped off by construction on a plot of 27ha, designed to develop public transport according to the objectives of Mobil2020. This construction project will extend to Gasperich, Bonnevoie and Hollerich.

As a result, shops, offices and housing will be created through this initiative established in partnership with the CFL to revitalize the area and its surroundings.

Carefully planned real estate projects
The new appearance of the “Station” area is due to a wise mix of rehabilitation and new construction. For instance, the historic Galerie Kons is gradually changing its look to house office and retail space.

Among other projects, the Alfa complex will change the face of the hotel of the same name and its environs. In addition to the hotel, the space will include three office buildings (Plaza, Liberty and  Arcades) and a shopping arcade at ground level.

Located conveniently between business districts and areas dedicated to recreation offered by the Station district, the Alfa complex is easily accessed by road and also benefits from its proximity to public transport and the airport.

The 19th century architecture will be retained, but the building will be equipped with all necessary technologies, including for the banking sector, such as access control, video surveillance, safes, etc.

Mobility, always a central concern
Once again, the issue of mobility is of high priority in all these real estate projects.

Besides the tram, Luxembourg City has invested in a phase of extension and modernization of the central railway station and the construction of the Cessange international station. Located in the heart of the future neighborhood of Porte Hollerich, its layout is generous and provides an excellent opportunity for the City to develop and revitalize the neighborhoods around the Centre-Ville.

The Porte d’Hollerich, a strategic entry point
Extending over 120ha of land, this real estate project is part of the General Management Plan (MAP) of the City of Luxembourg.

A former industrial area, the Hollerich neighbourhood is still anchored in its past, despite recent  adjustments, such as the P + R Bouillon, the roundabout access to the motorway, the school, etc.

Yet it is a hotspot in terms of mobility, since this area lies at the foot of the Esch Road and Hollerich street and is thus one of the main connections of the City between roads, highways and railways.
Transformation has been in process since 2010 and you should see 360,000sqm of housing, 500,000sqm of offices and 150,000sqm of shops in the years to come. 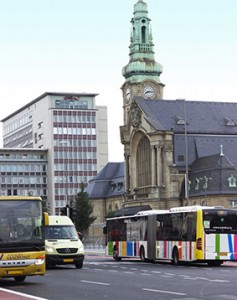 Visit our blog again next week to see the third part of our feature on promising business areas in Luxembourg: Gasperich.