Central Business District: Office real estate moved to the heart of the capital

As its name suggests, the CBD (Central Business District) covers the area in the centre of Luxembourg City. It concentrates around Boulevard Royal, one of the main roads of the capital, which combines national and international banks, fiduciaries, various services, etc.

Its central position enables it to connect quickly with other business areas of the capital, including via a carefully planned transport network.

The “Royal Hamilius” project: towards a more vibrant downtown
Besides the major real estate projects, the one most written about is the Royal Hamilius. Its establishment was initiated in 2007 by the move there of administrative services, followed by the public library a year later and the “Bierger Center” shortly afterwards.

With the Royal Hamilius, Luxembourg City intends to improve mobility in the heart of the capital, in particular by reorganizing public transport .

On the architectural side, the responsibility was taken by Foster + Partners, in partnership with Tetra Kayser Paul & Associates, and the Codic promoter, to give it the form of a mixed use, multifunctional island where offices, shops, services and housing coexist, thus entering into a process of urban development with  multiple objectives:

In short, all these facilities are designed to maintain and strengthen the position of the Upper Town as a place of favorite location for banks, insurance, services, professions, businesses, etc.

Mobility at the heart of all concerns
As already mentioned, the authorities attach great importance to mobility. Among the major projects implemented include the tram, which is expected to enter into service by 2017.

Another major work in progress is the rehabilitation of the Adolphe Bridge, overlooking the Pétrusse Valley. Since its advanced state of deterioration requires demolition works and major reconstruction, a temporary bridge will be built and maintained throughout the construction period. The first section was installed in early August and is expected to provide service until the reopening of the Adolphe Bridge, which, according to initial estimates, is not expected before 2017. 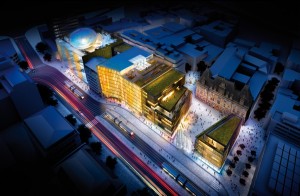 Visit our blog again next week to see the fifth part of our feature on promising business areas in Luxembourg: Airport.