Esch: An industrial phoenix rising from the ashes

Esch-sur-Alzette is the second largest city in the country. In the past the glory of the Luxembourg steel industry, the region has renewed its image in recent years, relying in particular on the development of infrastructure and housing to meet an ever-increasing demand.

Initiatives are also underway to satisfy a business clientele including companies wishing to establish themselves in an area well-served by public transport (bus, train) and close to main roads and motorway access.

A steel area rising from the ashes

The landscape of the Esch area offers ample space, especially for the establishment of factories such as Twinerg–Centrale Turbine Gaz Vapeur that produces and distributes gas.

In addition to these open spaces, there are also the areas previously occupied by steel companies. Abandoned due to the decline of economic activity, they have been given a new lease of life. The most important of them is the Belval site. The last blast furnace, extinguished in 1997, had been replaced by 120 acres of brownfields. Due to the uniqueness of the location, the Luxembourg government decided to invest in the conversion of the site. 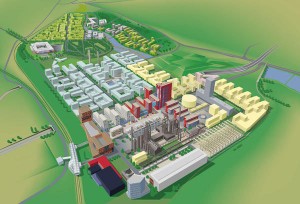 In partnership with Arcelor Mittal, they created in 2000 the company Agora, responsible for the management of Belval project. The plan was to build a living space where work, housing, education, research, recreation and commerce can each find their place.

The first “brick” placed in Belval was that of the City of Science, Research and Innovation. Since then, the site has developed around two old blast furnaces preserved as historical witnesses and the available space is divided between housing, shops and office space.

Since the rehabilitation of the site, many companies have moved to the heart of Esch-Belval.

A leisure complex already hosts a concert hall (Rockhal), cinema, shopping mall, supermarket, restaurants, etc. Soon, a research center will be established on the Terrace of the Hauts-Fournaux with the installation of the services of CRP Henri Tudor and public research institute CRP Gabriel Lippmann. The University of Luxembourg will also move almost all of its sections there in 2014.

Workers and residents therefore have all amenities nearby, a real advantage in the eyes of potential investors, renters and business owners.

Economic hub in the making

Research and technologies have an important place in Belval and are a point of attraction for many companies.

To meet an ever growing demand, these new housing projects will be implemented:

Visit our blog again next week to see the seventh and final part of our feature on promising business areas in Luxembourg Periphery.