Posted on 15 October 2019
This entry was posted in Lease, Office, Residential and tagged Bourbon, Gare. Bookmark the permalink. | Comments 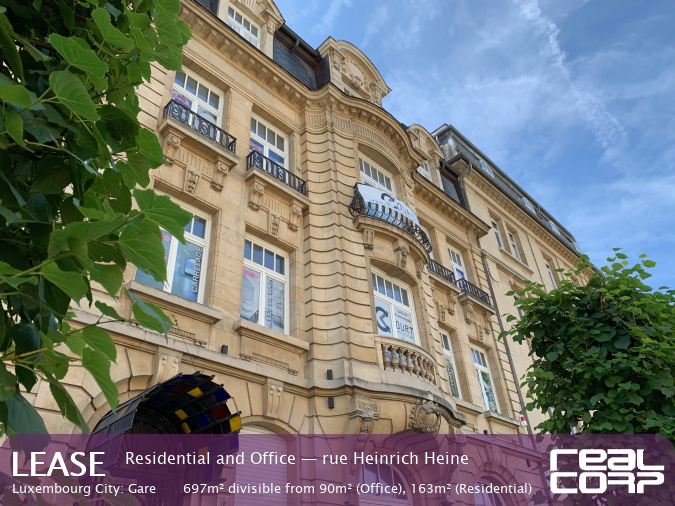 RealCorp Luxembourg is delighted to offer you this beautiful period property in rue Heinrich Heine in the Gare quarter. Entirely renovated, it offers both residential and office capacity. There are 12 parking bays.

To respect the essence of this sumptuous mansion, the renovators kept as much as possible of the original building. However, they have successfully incorporated the modern, functional internal style of a contemporary office.The renovations include interior layout, cabling, air-conditioning and a lift.

The office area comprises 697 sqm, divisible from 90 sqm. As such, it is suitable for either single-tenant or multi-tenant occupation.

On the upper floor is an attractive residential duplex of 163 sqm. There is a 100 sqm terrace at the back of the house.

About the Gare area

Gare (Luxembourgish: “Garer Quartier”) is a quarter in central Luxembourg City.The name translates from the French “Gare” into English as “Station”. As of 2018, the quarter had a population of 10,741.

Geographically, Gare is situated on the Bourbon plateau. A steep valley separates it from the Ville Haute quarter, heart of Luxembourg’s ancient fortification. In this valley, the Pétrusse river joins the Alzette river in the Grund quarter. The Passerelle, also known as the Luxembourg Viaduct or the Old Bridge, opened in 1859 to span the valley.

The Adolphe Bridge opened in 1903. It connects to the station via the grand Avenue de la Liberté, giving quick and easy access by foot, bicycle, bus, car or tram (2020) to the Ville Haute.